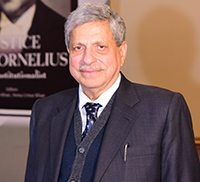 Specializing in Constitutional Law, Administrative Law, Service Laws and Civil Laws. Mr. Khan has appeared before the Honourable Supreme Court of Pakistan in most of the major Constitutional cases during the last two decades.

Visiting Lecturer of Laws at the University of the Punjab (1973 to 1980); National Institute of Public Administration; and Civil Services Academy.