Cornelius, Lane & Mufti (CLM) is one of the largest and most well reputed law firms in Pakistan, highly regarded for its expertise in both contentious and non-contentious matters. The firm has 12 Partners and over 30 associates operating from the firm's offices in Lahore and Islamabad. The firm is regularly recommended in international industry publications like Asia-Pacific Legal 500 and Chambers.

Evolution of the Firm

The firm was formed in 1975 as “Lane & Mufti”. The founding partners were Terence M. Lane and Afzal H. Mufti. Lane was a Solicitor and the senior partner of Baker & McKenzie, London until 1974 when he left that firm to form the new firm of Lane & Partners with associated offices in several countries. Mufti was an associate with Baker & McKenzie, London(1972-1975). He returned to Pakistan in 1975 and established Lane & Mufti in collaboration with Lane. 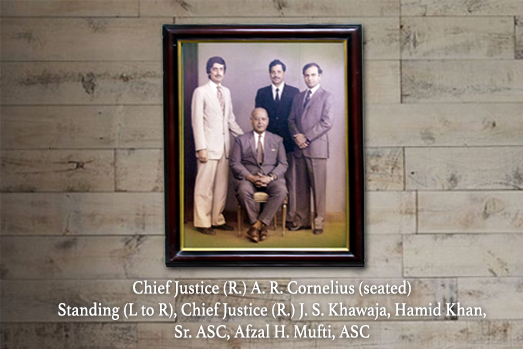 Justice (Retd.) Cornelius had been a Judge of the Supreme Court of Pakistan for nearly eighteen years, for eight of which he was the Chief Justice. Subsequently, he also served as the Federal Minister of Law and Parliamentary Affairs in the early 1970s. He practiced law as a senior consultant from 1975 till his retirement from the firm after his eighty-fifth birthday in 1988. While in practice, he conducted a number of major arbitrations and advised on various important matters involving public and international corporations. He also published a number of articles and papers on constitutional and other legal subjects. Justice (Retd.) Cornelius passed away in December 1991 and left behind a wealth of opinions and precedents and the legacy of his deeply honored name for perpetual use of the firm.

Afzal H. Mufti, Senior Partner, is an Advocate of the Supreme Court and High Courts of Pakistan. He was a Rhodes Scholar and studied law at University of the Punjab and Oxford University. He has practiced law in Lahore and London. From March 1980 to December 1987, he was on a leave of absence from the firm and worked for the Asian Development Bank in Manila. He has practiced as an international legal consultant since 1988.

In 2001, Hamid Khan, Senior Partner, was bestowed with the title of “Senior Advocate of the Supreme Court of Pakistan”, a singular title conferred upon the most experienced and seasoned litigators appearing before the Supreme Court of Pakistan. He is a distinguished law professor and author of several text books on constitutional and other legal subjects and a national leader of the Bar.

Salman Aslam Butt joined the firm in early 1980s and quickly established a name for himself. He is a Senior Partner of the firm and is strongly recommended for both contentious and non-contentious matters. He served as the Attorney General for Pakistan from January 2014 till March 2016 (during this period he was not practising with the firm). In that capacity he also acted as the ex-officio Chairman of Pakistan Bar Council (the apex regulatory body of the legal profession) and ex-officio member of the Judicial Commission of Pakistan. As Attorney General he represented the Federal Government of Pakistan in several landmark Constitutional and fiscal matters, including the successful defence of the 21st Constitutional Amendment before the Supreme Court. He also represented the Government of Pakistan in several international arbitrations. He has recently been designated as a “Senior Advocate of the Supreme Court of Pakistan”. He has been recommended for Banking & Finance, Capital Markets, Corporate/M&A, Dispute Resolution and Real Estate (Pakistan Chapter, Asia Pacific Legal 500), for Corporate & Commercial and Dispute Resolution (Pakistan Chapter, Chambers Asia) and Corporate and Commercial (Pakistan Chapter, Chambers Global). He has also been recommended in International Who’s Who of Capital Market Lawyers.

The firm has kept up its healthy tradition of nurturing and promoting indigenous talent. The next generations of lawyers at the firm are well on their way. Munawar-us-Salam and Shehzad Ata Elahi joined the firm in 1999-2000 and made partner. Both, along with the founding and senior partners of the firm, are regularly recommended in international industry publications like Asia-Pacific Legal 500 and Chambers. Waleed Khalid and Muhammad Haroon Mumtaz joined the firm in 2004 and made partner.